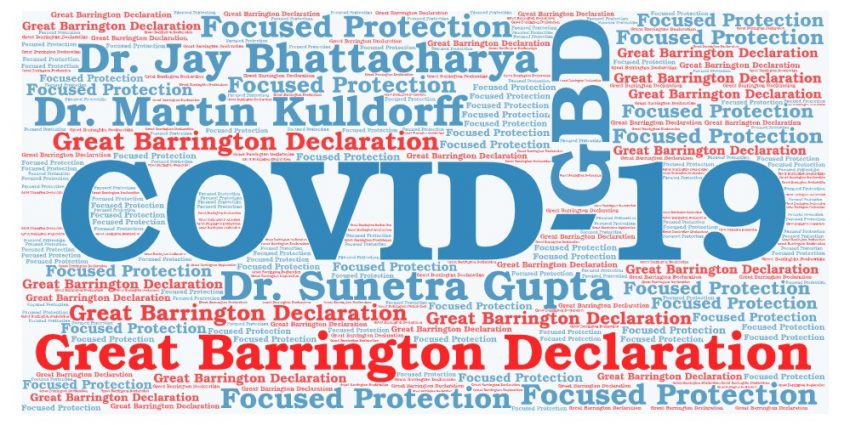 On 4/10/2020 Dr. Martin Kulldorff, professor at Harvard University, Dr. Sunetra Gupta, professor at Oxford University, and Dr. Jay Bhattacharya, professor at Stanford University Medical School, authored and signed a declaration in Great Barrington, USA, known as the Great Barrington Declaration (GBD). These three doctors are epidemiologists with other qualifications. It has 42 medical and public health scientists and medical practitioners as co-signers. Many of them are epidemiologists and some are doctors in other fields. The declaration can be read and signed in many languages, most of them European. Urdu is the only Indian language in the list.
The doctors recommend Focused Protection.
Some sentences of GBD are as below.
“Current lockdown policies are producing devastating effects on short and long-term public health… Keeping students out of school is a grave injustice.
Keeping these measures in place until a vaccine is available will cause irreparable damage, with the underprivileged disproportionately harmed.
We know that vulnerability to death from COVID-19 is more than a thousand-fold higher in the old and infirm than the young. Indeed, for children, COVID-19 is less dangerous than many other harms, including influenza.
The most compassionate approach that balances the risks and benefits of reaching herd immunity, is to allow those who are at minimal risk of death to live their lives normally to build up immunity to the virus through natural infection, while better protecting those who are at highest risk. We call this Focused Protection.”
Indian Government imposed the harshest lockdown in the world in March 2020. It was for 21 days. It has got extensions since then and continues with relaxations. As lockdown became unpopular the government changed the word to unlock.
While the central government relaxed restrictions, some state governments continued with them or added some restrictions of their own. In some states places of worship opened in June. In Maharashtra they are closed.
Schools are closed. There are online classes. For that students should have computers with internet connection. At times there is no electricity or internet connection. Students miss on classes.
In Bombay metro and monorail have started. Suburban trains are limited and are allowed only for certain categories. Now women are allowed from 11 a.m. to 3 p.m. and from 7 p.m. onwards till trains stop.
India’s economy which was in decline before Corona pandemic has declined further due to lockdown. IMF in its World Economic Outlook report has projected India’s economy to decline by over 10% this year and Bangladesh’s to grow by 4%. Bangladesh’s per capita GDP would surpass India’s this year.
Sometimes patients are wrongly told they have Corona. In one case one patient was in a hospital for pancreas swelling. That hospital told him his test report showed he has Corona. He was shifted to a Corona hospital. There they stopped pancreas treatment and treated him Corona. He was thirsty. He wanted water to drink. He was not given water. He died. After that they found he did not have Corona.
The bodies of patients who die of Corona are fully wrapped and their faces are not visible. Sometimes bodies have gone to wrong persons and mistake is known after funeral is over. Faces should be visible to avoid such mistakes.